Where in the world are Jacky Walsh and Skipper? 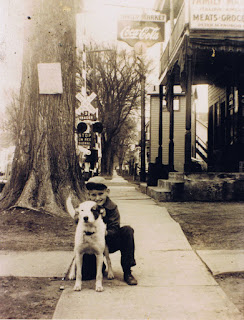 Discovering the exact place a photograph was taken often requires some detective work.  In the case of the above photo, it was pretty straightforward, but these same techniques can be used to solve more complex mysteries as well.
On the back of this photograph was written “Jacky Walsh and Skipper”.  While I would not have known the dog’s name, I would have recognized my father immediately.  I always thought he looked the same in pictures, whether he was an infant, child, teenager or an adult.  The only thing that changed was his size!  As my father spent his childhood in Glens Falls, NY, I figured I could probably safely assume the picture was taken on one of the city streets.

Even more specifically, my dad lived in the east part of Glens Falls, near Warren Street and in the neighborhood of East Field.  One of the few discussions we would ever have about his childhood was when he pointed out some of the homes he lived in on streets such as McDonald and Cooper.  So, it would probably make sense that the location was somewhere he could walk to.  His age looks to be about 8 or 9, so this would make the date of the photo about 1946.

The store in the background provided the main clue.  The Coca-Cola sign gives the name of the establishment as the “Family Market”.  Consulting a Glens Falls City Directory at the Crandall Public Library in Glens Falls from 1946, I could find no listings under “Groceries” with that name.
Next, I tried to enlarge and enhance the sign that is partially visible in the upper corner of the photo.

The sign made it clear that this was an Itailan-American market, and the proprietor was Peter M. Fruscio.  Back to the city directory I went, and this time I found the entry “Fruscio, Peter, grocer, 17 ½ McDonald.”  So, the location of the grocery store made sense, as I knew my father definitely lived on McDonald St.  Sure enough, I found a listing for my grandfather, John Mortimer Walsh,  in the same 1946 directory at 7 McDonald Street.

So- mystery solved!  A little bit of family history and local history in a photograph.  This holiday season, get that box of old photographs out and start some family discussions.  Nothing defrays the annoying political or religious debates like a dose of “remember when?”  You may even solve a few family mysteries!