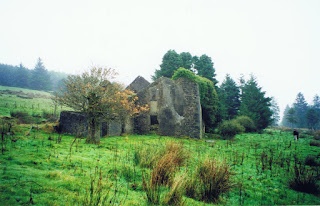 When my husband, sister and I visited Ireland in 1999, we met Michael and Brendan Mortimer, a father and son who were my cousins.  Brendan took us on a tour of the area around Killinure, County Laois, and we visited the ruins of a large old house way up in the Slieve Bloom Mountains.  Brendan told us that his father Michael had lived in the house as a child with his family.  Over the years since I have attempted to find out more about that place, but there is virtually nothing online about “Bockagh Lodge”.
This week I re-visited a source I had only previously skimmed and found a hidden gem!  The Schools Collection  is an attempt to digitize Ireland’s folklore collection, and it contains scanned pages from a series of interviews, stories, poetry and artwork from pupils in 13 counties during the 1930’s.  As luck would have it, Laois is one of the 13 counties represented, and in the collection I found an item about the townland of Bacca, submitted by pupil James Phelan in 1938. 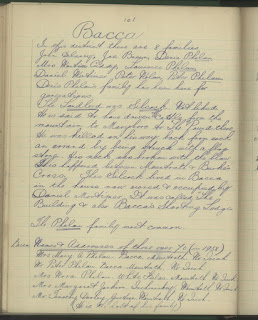 It contains very specific information about the place we visited in 1999- including confirmation of the Mortimer family’s residence there at the time it was written.  Michael Mortimer, the gentleman I met in 1999, would have been a lad of about 15 in 1938, and the ledge is described as being owned by Daniel Mortimer, who was his father.  One wonders how many (or few) modern conveniences would have been available at that time in such a remote place, and what life was like in the area.
Especially interesting are the references to the lodge’s past- it was the home of the “landlord”, a man named Silcock.  The description of his rather untimely demise brings to mind similar stories- like that of landlord Major Denis Mahon who was killed under mysterious circumstances in County Roscommon in the 1840’s.  The account goes on to name those in the townland who were over 70 years of age at the time- names like Phelan, Moore, Ryan, Cuddy and Fitzpatrick that are still found in the area today.
Of course a discovery like this only leads to my questions:
1.        Who was “Silcock” and is the story of his dramatic end true?
2.       When was it built and by whom?
3.       How did Daniel Mortimer come to own and occupy the Bacca Shooting Lodge?
4.       Why was it abandoned and who owns it now?
Probably the aspect of this that’s most fascinating is that information like this was collected and preserved, then made available online.  The lack of recorded information and the strong oral tradition among the Irish make finding genealogical information on one’s family fairly difficult.  Collections such as this one attempt to bridge the gap between the two and bring another badly-needed source to those of us with Irish ancestors.  The collection adds a narrative element to what might otherwise just be dry facts and figures obtained from more traditional sources.
Posted by Lisa at 10:23 AM