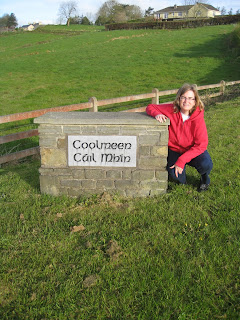 This doubt has allowed me to be very critical and not easily convinced when it comes to uncovering the origins of ancestors for clients.  I try to examine all the sources I can get my hands on and pass on to them when I have doubts.  I often inform clients that in my own personal experience, approximately 20% achieve an absolute, no-doubt-about-it place of origin for their ancestor, 20% never have any good idea, and the remaining 60% fall into the “gray area”, such as Patrick Penders and Margaret Hehir.
Skepticism, especially in examining the origins of our Irish ancestors, is a healthy thing, but it still makes me (and some of my clients!) squirm!
Posted by Lisa at 9:07 AM 4 comments:


Bockagh Lodge, Part II
Last month I was thrilled to find some information about a place I had visited in Ireland that had long fascinated me- Bockagh Lodge in the Slieve Bloom Mountains of County Laois.  The stories about the area furnished by schoolboy James Phelan in 1938 answered some questions but also posed others.  Finding answers to even one of those questions has been a challenge.
Information on a landlord named Silcock was very sparse.  My initial thoughts were that if indeed a murder under the described circumstances had been committed, certainly there would be some documentation of it.  Nothing could be found in available newspapers, there was no death record for anyone with the name, no will calendar entries.  Eventually, I was able to track down a reference to what surely was the event referenced in the 1938 recollection in the Irish Petty Sessions Court Registers database on the Find My Past website.  The Petty Session Court in Ireland handled cases that were just that, petty.  Not the place you would expect to find evidence of a murder.  So common were cases of livestock trespassing, public drunkenness, neighbors squabbling, and suits for back wages that nearly everyone’s ancestor appears in these records.
The record shows the defendant in the case was Lawrence Breen of Bockagh.  The cause of the complaint reads “At Bockagh in Queens County on the 17th of December 1886, def (defendant) did unlawfully assault one R. J. Silcock by striking him with a stone knocking him down and injuring his face.”   The sentence was a fine and one month in the Kilkenny jail.  Lawrence Breen was a farmer, married to Kate Peters, with a family of 9 children.
Apparently bad blood already existed between Mr. Silcock and the Breen family.  Another petty session court record alleged that on 2 June 1886 Lawrence, Kate, Bridget, Mary and another Kate Breen “unlawfully and willfully trespassed on the house and premises of the complainant (Mrs. Nannie Edge) and refused to leave when warned to do so.”  Robert J. Silcock was a witness in the case.  The defendants were all sentenced to fines and imprisonment in the Kilkenny jail for one month.  Supposedly one of the Kate Breens sentenced was the wife of Lawrence.  Wonder what happened to their children during the month they were incarcerated?
So, a question answered, but more arise.  Who is Mrs. Nannie Edge?  Was she the owner of the estate and the lands where Bockagh Lodge lies?  Was Robert Silcock some kind of middle man?  Was he the person who was having daily contact with the tenants and thus the one they reviled?  Much more research is needed, and most likely a crash course for the researcher in Irish land records history!
Posted by Lisa at 7:50 AM No comments: