I know these people must be relatives, but who are they? 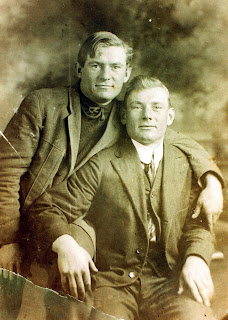 Any family photo collection invariably contains those pictures of people whom no one can identify.  Boxes and boxes of photos end up in antique shops for sale because once the older generation is gone, no one knows who these people are, and they never thought (or had time) to ask.  I find myself fascinated by these orphan photos (more on that in another blog post), but I am more intrigued by the photos I know came from my own family’s collection of people who aren’t recognized by anyone still living.
The above photo of two handsome gentlemen is a case in point.  This picture came from my in-laws rather small collection of family photos.  They moved around a lot, so they never accumulated the kind of “stuff” many other people do.  Somehow, this picture was saved in a small cache of old photos, so my assumption was it had some importance.  The other photos in the collection were fairly random, a few of my husband’s grandfather Tom Dougherty in his youth, more of his grandmother Helen Polchlopek’s family.  Another photograph in the collection is below, and shows the above-mentioned Tom Dougherty in the back row on the left.  Next to him is his mother, Regina (Tetrault) Dougherty, and next to her is his father, Thomas Dougherty, Sr.  They were identified by my father in law, Steve Dougherty, as his father and grandparents.  Steve remembered his father had 3 sisters- likely the 3 female adults in the photo.  Research revealed the names, ages and genders of the sisters’ children, leading to likely identification of the youngsters in the photo.
Looking at the older man identified as Tom Dougherty Sr., I can’t help but wonder if he is the same man who appears on the right in the picture of the two men above.  From what I can make out in the group photo, the facial features look similar.  The way the two men are posed indicates a close relationship of some kind.  Genealogy research revealed that Tom Dougherty, Sr. had two younger brothers, James, who was a year younger, and Martin, who was 6 years younger.  James was killed in a train accident in 1895.  An examination of the original photo would be in order at this point to determine if there is a photographer’s imprint.  It might be possible to use city directories for the location where the photo was taken (in this case, Providence, Rhode Island) to determine what years the studio operated.  This could narrow down the possible years the photo may have been taken, and might help to determine which of the brothers appears in the photo.
The man on the right appears to be dressed more casually than the man on the left.  This might indicate that the man in the suit had a desk-type job and the other man was a laborer.  Thomas Dougherty, Sr. was a teamster, a profession he followed throughout his life.  The style of dress of the man on the right seems to fit this occupation.  James Dougherty worked on the railroad, where he was killed.  The man on the left seems a bit overdressed for a railroad worker.  Martin Doherty had a variety of occupations during his lifetime, one of which was a gardener for a private family.  Maybe he hobnobbed with the better sorts, which might explain the duds.
No matter who they are, the photo shows a couple of genial lads, the kind whom you might expect to find hanging out at the local pub.  I would not mind claiming these good looking guys as my relatives any day.
Posted by Lisa at 6:04 AM