My great great grandmother Anne Mortimer Walsh came from a rural, mountainous area of County Laois (Queen’s County), Ireland.  I have been fascinated by the area for many years and have visited there on a few occasions.  Several of my cousins still live nearby there.  With the explosion of never-before-accessible Irish genealogy information being placed on the internet seemingly almost daily, it’s become possible for me to study the people who lived there in depth. 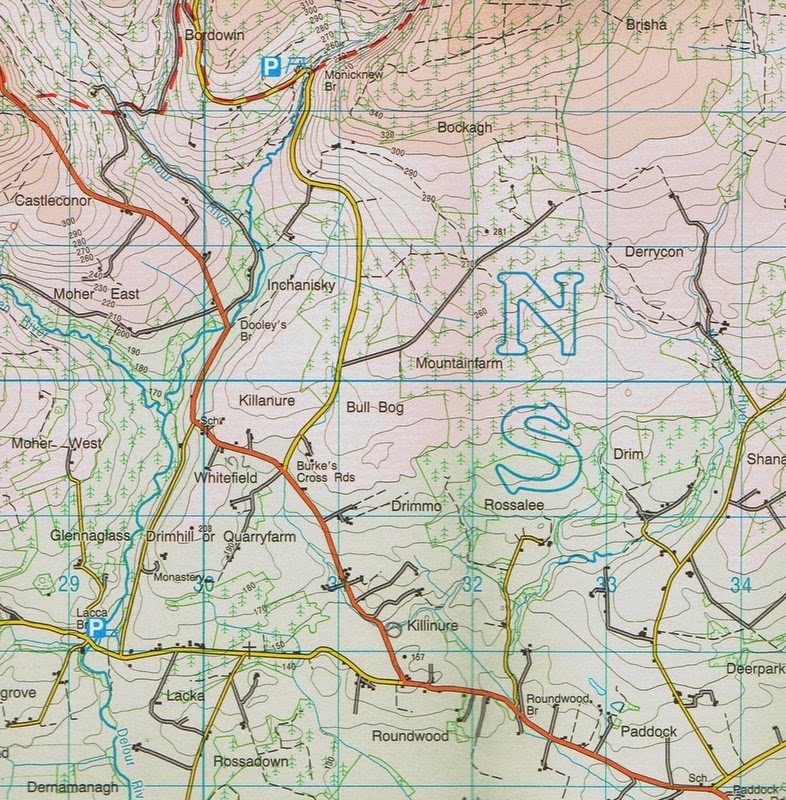 The 1901 and 1911 Irish Census are the earliest records of their kind that cover the entire country.  These have been available online since 2009.  When used in conjunction with the church and civil records for County Laois available at RootsIreland, one can trace the residents living in the area, note naming patterns in the families, and document how they are related to each other over many years.  Even with the accessibility and seeming completeness of these records, constructing family groups with any accuracy is still a challenge.
Anne Mortimer and several of her siblings had left Ireland long before the surviving 1901 census was taken, but she still had a brother residing in Lacka District Electoral Division.  Studying the family of John Mortimer and his neighbors in the townlands of Bockagh, Killinure, Roundwood, Rossalee, Whitefield, Inchanisky, Mountainfarm, Drimhill or Quarryfarm, Drimmo, Rossadown, Lacka, Bordowin and Monicknew has opened my eyes to the way of life Anne left behind.  The 13 townlands listed above had a total population of about 300 in both the 1910 and 1911 censuses.  Examining them has led me to a few observations.
1.        There were many elderly people enumerated, especially in the 1901 census.  Lots of them would have known my great great grandmother, even though she left the area in the 1860’s, and many would have had memory of the great famine that occurred in the 1840’s.  Most lived with one or more of their children, and it was not uncommon for them to be 80 years old or above.
2.       Men tended to remain bachelors until well into their 30’s and even 40’s.  Women did not marry at a very young age either.  Likely this was due to economic necessity.  The rural Irish in general did not own the land they lived on and there was only so much of it to go around, forcing young men to seek employment in the more urban areas or emigrate.
3.       Families tended to consist of more daughters than sons, probably for the reasons listed above.
4.       Ages given in the census records are WAY off, much more so than the ones given in American census records.  Baptism records often give dates as many as 10 years off an age given in a census record, for both adults and children.  I’ve often heard it said that many Irish did not know how old they were, and this would seem to support that notion.
5.       Class distinction is very obvious between the enumerations of the landed gentry and the working classes.  In the Lacka DED, the working class people were almost exclusively farmers and of the Catholic religion.  Their names were those we would all consider more traditionally Irish.  The gentry were members of the Church of Ireland or England, had occupations such as landlord, military officer or barrister.  In the US, upper, middle or lower classes are not as easily inferred from a census record.
6.        There were not many Irish speakers among those enumerated in this district, and those that could speak Irish were bi-lingual and not natives of Queen’s County.
7.       Not all Catholic parish records are created equal.  The entries for Camross parish are much more detailed than those for neighboring Mountrath parish, some baptism records even giving details of marriages that occurred years later and in different places as far away as New York!
The database now consists of 606 people, with more details being added as I encounter them.  Major surnames in the area were Phelan, Delaney, Breen, Carroll, Cuddy, Doran and of course Mortimer.  If you have any ancestors from this area, contact me and I’ll share my information.
Posted by Lisa at 5:21 AM