I just finished reading an interesting book about the 1916 Easter Uprising in Ireland called “Easter Widows”.  Written by Sinead McCoole, the book tells the stories of 7 women who were made widows by their husbands’ involvement in the Rising.  All the men signed the Proclamation of the Irish Republic, declaring Ireland free of British rule, and were executed because of it.
Easter Widows
I have to admit I did not know much about the 1916 Easter Rising before reading this book, aside from the fact that it happened, and it helped facilitate Ireland’s eventual independence from the United Kingdom.  Learning more about the events of that time period in Ireland history made me wonder what  my ancestors thought of the idea of an independent Ireland.  At the time of the 1916 Rising, none of my husband’s Irish immigrant ancestors were still living, and only one of mine was.  My great great grandmother Anne Mortimer Walsh was, at the time of the 1915 New York State census, a 68 year old widow living in Glens Falls in a home she had purchased with her children on Haskell Avenue.  She had been in the United States for 50 years.
From information I’ve been able to gather about great great grandmother Anne, she appears to have been a capable, independently-minded woman (identified as “Anne Mortimer, widow of James Walsh” in her obituary, eldest son named for HER father, not her husband’s, grandson named John Mortimer Walsh in her honor).  It would not seem out of character that she would have had some strong opinions about the political situation in her native country.  Unfortunately she left no known writings of her thoughts, but I can imagine there may have been some lively discussions amongst the family about the situation as it unfolded in Dublin that April of 1916.
All census records that show her indicate she was literate, so it’s possible she may have seen the headlines about the rising in the Glens Falls newspapers.  These articles both have a very strong pro-British slant, with their source no doubt being the Associated Press.  England was heavily involved in  World War I in 1916, and the United States would enter the war a year later as their ally. 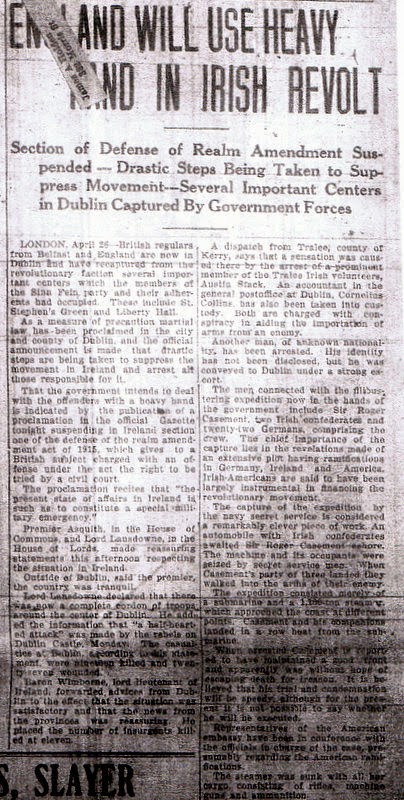 Thoughts of overthrowing the British government, and indeed, uprisings, were nothing new in Ireland.  There had been prior revolts in Ireland 1798 and 1867.  There was strong Fenian movement in the Troy, New York, where Anne and her husband James Walsh settled after coming from Ireland in the years they lived there.  In fact, at least 2 separate Fenian Brotherhood organizations were active in the area.  Were James Walsh or Anne’s brothers Patrick and Matthew Mortimer involved?  As it was a secret organization, we will probably never know.
Contemplating the role current events played in our ancestors’ lives opens up another dimension to our research.  Newspapers from all over the country and from many time periods are readily available.  Looking up a headline from your ancestors’ home town newspapers might get you thinking productively about the role they played in the politics, popular culture and communities of their day.
Posted by Lisa at 7:51 AM